“It’s nothing, but it says everything.”

When Jeanette Skanshage was ten years old she was given a silver bracelet as a gift. In truth that bracelet initially spent most of its time lying in her jewellery box. But as the years passed she began to wear it more often, almost every day. She put it on, took it off, and it travelled around with her. Its sheen dulled with time. But it remained durable and stylish despite the passage of time and trends. She polished it so it looked like new; it grew dull again, so she polished it again.

Jeanette trained as an engineer and worked for fifteen years on bridges. One day she had had enough; a dream had been growing inside her. What she really wanted to do was make jewellery. She wanted to create jewellery that was elegant, simple and timeless – just like her silver bracelet (which she still wears occasionally).

So now Jeanette creates jewellery for you. Under the brand of Skanshage Sweden she makes necklaces, bracelets, earrings and rings that are minimalist and eternal. For her, the creative process is not about following trends or consciously seeking inspiration. Instead, Jeanette is passionate about creating jewellery with elegant designs and precise angles and proportions. She also takes pride in the fact that her jewellery is so distinctive; people often comment that they can tell from a distance of several metres that “that piece comes from Skanshage”.

Since it was founded in early 2013 Skanshage has become a highly admired brand, thanks to eye-catching designs that dare to stand out. When Jeanette Skanshage showed her collection in the UK (her jewellery is available in many parts of Europe) one woman stood entranced in front of her top-selling necklace, Stick. She stood there for some time before exclaiming: “It’s nothing, but it says everything!” 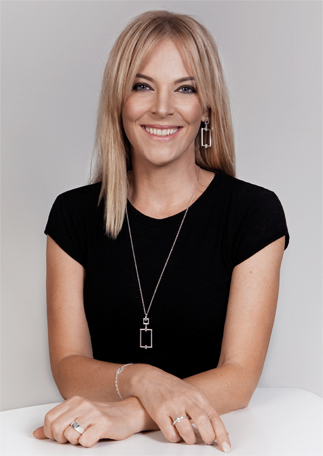